Wow this has been a trip and a half. Ambulance picked him up in Siem Reap to transport to hospital in Thailand close to border instead of going to Bangkok.

Well this fellow American I think I told you about was in expensive private hospital. And he needed physical therapy because he had a stroke a couldn’t move his legs . Or talk. Or eat.

So he was moved to a hospital in Surin, Thailand, which is about three hours away from Siem Reap, Cambodia. But you have to cross the border from Cambodia to Thailand. So they parked the ambulance and we all had to check out of Cambodia thru immigration and then check back in thru immigration to Thailand. There were five of us. So that took awhile.

Finally we get to the private hospital that had physical therapy machines. But they wouldn’t let him in. They said he needed brain surgery!!! I am like no no. I said read the ct scan. No machine.

“Go down the street to government hospital. They gave ct reader. ”

So down the street we go. After waiting in emergency the doctor says they can’t keep him. We have limited resources. Oh no. This is a nightmare. Please doctor can you do a ct scan and show them he doesn’t need brain surgery! He says Ok. But only can stay two days.

Anyway the ct scan came back fine. No brain surgery needed. Now he is in a ward with like 12 other people. Short staff so nobody is really watching him. You can hire an extra nurse. Which I said yes. But they didn’t do it. Then family sent money and they have him extra help. Like water and diapers.

I stayed for three nights. No one spoke English. Only the doctor in emergency and the head nurse. And that was difficult.

I headed home. I changed hotels three times. I was wiped out. I took a baht bus to the bus station after showing him picture of bus on my phone. Took a mini van back to the border. This time I went into the casino they have on the border. Had two cups of coffee and a donut and went to see what I could play. Some slots. Some roulette. It was a nice break from three days of torture.

Then my friend in Thailand and his friend/wife who is Thai, spoke with ambulance/nurse about a care home with physical therapy.

So back in ambulance and off to Rayong ,Thailand. Seven hours away.

He arrived last night at midnight. It’s a great facility.

My friends drove down from Pattaya to check him in. If it hadn’t been for them this whole thing would not have worked.

Money was western unions to friend M. He gave money to friend N and she paid the hospital yo get him out. Paid the ambulance yo get him to care home and paid the care home to take him. And she could communicate with every one because she was Thai and spoke English because she had lived in California and Las Vegas with M for years.

Would have been one big cluster…

When I first arrived in Thailand we were in Bangkok. Big city. Lots of traffic. Lots of huge shopping complexes. I couldn’t believe the shopping. I am from San Diego, California and we have nothing to compare. Probably compared to Manhattan. As many people as Manhattan. Amazing.

They have lots of transportation. Trains. Taxis motorbikes. Elevated rail.

I was completely lost. Went on the bkk. Could not figure out how to buy ticket or which way I should be going. I needed to buy SIM card so I could be in touch with family and my travel partner that missed the flight from LAX because he left his passport in his backpack in the van back in San Diego.

Finally figured it out. I think I found an Aussie that spoke English. Otherwise you are out of luck. No one spoke English at ticket counter. They had ticket machines that made no sense to me at all.

Very long day. Then I couldn’t get a cab. So I opted for motorbike ride. Scared to death. Thought I was going to die. He swerved in and out of traffic at a very accelerated speed. Did not take motorbike ride again.

But in the meantime I managed to find more trouble.

Get into that next time!

My American friend is still in private hospital in Siem Reap.

I coordinated to have him transported to hospital in Thailand that would provide him with needed physical therapy due to his stroke.

Still in hospital in Siem Reap as his family gathers enough money to pay the bill. Thousands of dollars. I am talking almost $10,000.

The transfer will be good both for his physical well being but also saving his family from financial ruin.

Everything is ready to go. Approval that he can move. An ambulance that is way reasonable to ambulance him from Siem Reap in Cambodia across the border to Surin, Thailand. Two hours to border, one hour to Surin. Plus whatever else they run into.

So hope he gets there soon!!! Please be sure to have travel insurance or at least medivac insurance if you plan on visiting any country outside of your own. Be safe!!

This is my tuk driver and his family. He invited me to their home for dinner one Sunday. Yesterday was Sunday and my third Sunday for dinner

They don’t have grandparents. I didn’t ask, but they may have been lost under the KHMER rouge that killed thousands of Cambodians during their horrific take over in 1979 of Cambodia. Or it could have been earlier when then president Nixon ordered the bombing to kill North Vietnamese possibly hiding. They are still finding bombs out in the fields.

Anyway Sohphaf wife’s made rice and vegetable soup with meat. The children were happy I visit because they have really good meals with company. 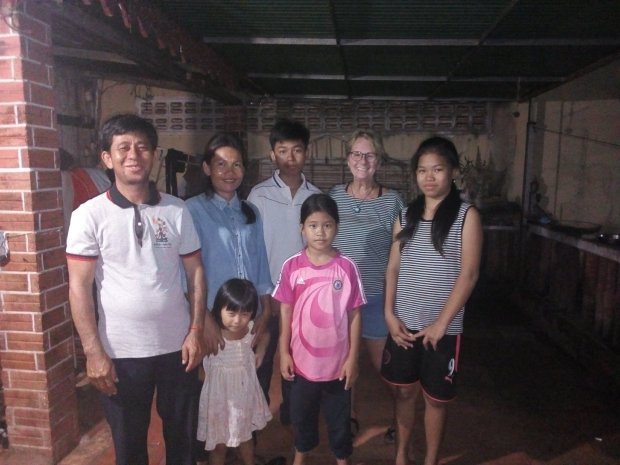 Well my American friend that had a stroke and was in questionable hospital is now in private hospital. But the bills are in the thousand already. His family is panicking. They don’t know what to do. He can’t walk and to get him to Bangkok hospital will be thousands and thousands of dollars. Scary. I visit him and he can eat now. He still can’t move his legs.

The other is the waitress that works at hotel. Makes very little money. Has to leave her son with parents four hours away. Her father is sick with lung inflammation and won’t go to hospital in Surin Thailand because it is too much money. Friend from UK asking for help online but no luck. It’s always about the money. The American may wind up on the street. And the Cambodian may die. It’s a tuff life here in Cambodia without medical.

This was worse than what the Senate did to Anita Hill

I downloaded my USA registration yesterday. Need to fill it out and send it off so I can vote in mid-term elections. I did find a post office while on my walk by the river. The only post office I believe in Siem Reap. there are no nail pick up like America. I have seen so me post boxes around town, but have no stamps. So off to the Post Office. I have never sent anything by mail since I have been here in Siem Reap, Cambodia. I also have never received mail. I have a virtual mailbox set up from California. They notify me if there is mail. I review it and if I want the contents I have it scanned and sent over email.

And “They fell in love”

Is he completely off his rocker? The other day he said he has a “big brain” who says stuff like this.

He spoke to the UN in a speech and said his was the greatest administration since the beginning of America. He was laughed at by the assembly of foreign countries.

I have to find the stories and post them, I can’t make this stuff up.

Trump authorized an FBI investigation into Brett Kavanaughs accusers accusations before a full Senate confirmation of up to a week. Trump is being really nice. Last week he was screaming about left wing conspiracies. I don’t trust him. When he is nice he is up to something. He has already limited the search of employment records of Mark Judge, the only person in the bedroom when the alleged attack on Dr Blasey-Ford occurred according to Dr Ford.

There have been three confirmed accusations against Brett Kavanaugh.

There will only be one accuser against denier.

There have been no collaborating testimony called.

This is a he said; she said hearing on the most important nomination of a supreme court justice to the highest court in America.

This was mishandled by the house majority leader Mitch McConnell from the beginning. He wants to “plough thru to confirmation” his words.

This is a travesty of justice.

Update: there will be an FBI investigation for no more than a week. But its something. An investigation to try and get at the truth!

Sorry about getting off track.

He was confirmed!! Do not freaking believe it!

Well the reason I came to Cambodia-was to get a visa. My visa in Thailand had expired and I needed to leave the country. I flew from Bangkok to Siem Reap international airport. This was in October 2016.

After I arrived I took my first tuk drive into Siem Reap. I booked a hotel on booming.com.

The next day I hired a tuk driver and made a trip to the famous temple Angkor Wat.

On the Drive there which was maybe twenty minuites there were monkeys jumping thru the trees. It was quite entertaining.

Angkor Wat cost I believe $20 for the day. Hugh complex of many temples. I went to the main temple and climbed among the ruins. It was very impressive being from the 11th and 12th century. Also being one of the largest civilization in the world at the timé. Today it is the largest religious temple in the world.